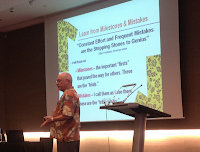 Q. In your presentation your first milestone dates back to April 2006. Much has happened since. What's your assessment of these past years in Social Media and Pharma?

A. I started my Pharma Social Media Timeline in 2005/6 because that is when the modern era of social media began with Blogger, for example. I started blogging in January 2005. This was the beginning of what used to be called the Web 2.0 era, where social media tools like Blogger were offered to ordinary users to create content and communities.

The pharmaceutical industry was, in some respects, an “early adopter” of modern social media. But you really have to look at individual pharma companies to assess how sectors of the industry are using social media. GlaxoSmithKline, for example, has truly been an early adopter of the “spirit” of modern social media– I recall that it sponsored an online smoking cessation forum on an a third-party patient site before 2000. But that was a Web 1.0 experience although there was true community amongst forum members at the time.

Aside from viewing the pharma industry as a monolithic use of social media, the other problem is defining exactly what aspect of social media should we be looking at. I think the most important aspect is the direct conversation between pharma and its audience via social media such as Twitter, Facebook, and blogs. Some pharma companies are better than others at engaging in this conversation, but the industry as a whole have made great progress. Many companies now routinely handle customer complaints via Twitter and some have Facebook pages or their own sites that allow comments and conversation from and to consumers.

Q. What should be the role of pharma companies in relation to Social Media?

A. There are many ways that pharma companies can use social media. From the point of view of patients, pharma can use social media to support their products – ie, help patients report AEs [adverse events]. Of course, there is a problem in drawing the line between support and product promotion, which is not allowed in the EU.

Q. What are the main mistakes that have been made by pharma companies?

A. That’s difficult to say – there have been many kinds of mistakes. Hopefully, the industry has learned from these mistakes. Probably the biggest mistake a company can make when initiating a social media campaign is not to be prepared for crises that may arise. Companies must have robust social media standard operating procedures to cover all contingencies.

Q. What have they done correctly? Which companies in your opinion are doing things right?

Q. FDA promised guidelines “by the end of 2010" and so far they have only issued a draft that focuses exclusively on social media discussion of off-label medication use. What are your expectations for the near future?

A. A little-noticed "Miscellaneous Provision" of the "Food and Drug Administration Safety and Innovation Act" (aka PDUFA), which was signed into law by president Obama on July 10, 2012, simply states that “not later than 2 years after the date of enactment of this Act, the Secretary of Health and Human Services shall issue guidance that describes Food and Drug Administration policy regarding the promotion, using the Internet (including social media), of medical products that are regulated by such Administration.”

This, however, may have more bark than bite. It seems that the FDA will dole out social media guidelines as part of other guidelines – as they did with guideline for responding to off-label questions. Yet the FDA has not come up with any guidelines covering topics discussed at the November 2009 public hearing. It’s difficult to be optimistic about this given all the other things on FDA’s plate. Plus, there are a few legal, first amendment challenges that pharma has raised AGAINST FDA’s guideline process. Some pharma companies – notably Pfizer – demand FDA develop new legally-binding REGULATIONS regarding social media. The problem is that guidelines are not legally binding, so a new FDA administration can ignore guidelines written in the past.

Q. Pre-moderation or post-moderation for pharma social media sites? What do you prefer or recommend?

Q. What advice would you give to a pharma company that is determined to invest their efforts on Social Media and wants to do the right thing?

A. Invite me in to discuss Pharma’s Social Media Trials & Tribulations to learn about the issues and how to avoid making mistakes.